Matthew Shenoda’s voice is dangerous, mystical, moving. Sonia Sanchez’s introduction ushered readers into his first collection, Somewhere Else (Coffee House Press, 2005), auguring how his work thrusts us to the threshold of images never encountered before. She spoke, anaphoric and euphoric:

Let us take Sanchez’s questions as our guide. As she says, Shenoda’s work sings in the mystic and material idioms of the desert, never shying away from the stark sightings one catches of his native Egypt and its wanderings both internal and in diaspora. Let us read his work together and carry the question — What does “Coptic” taste like? — to its lyrical conclusions.

Begin here: Shenoda’s parents are Egyptian Copts, members of the most widespread Christian denomination in North Africa, inheritors of the traditions of the Desert Fathers and, also by tradition, adherents to a faith first founded by the apostle Mark a few years after the death of Christ. Those origins are the vast landscapes Shenoda’s language traverses, and they map the trajectory of African diasporas often overlooked. His body carries across ancient ruins, isolated villages, crowded Cairo streets, an L.A. highway. His work speaks to an imagined all-America and a pan-Arab audience. Begin here.

This first collection starts with an epigraph, a Zulu proverb from the other end of the continent:

A word uttered
cannot be taken
back (x)

The route from South Africa to Egypt was infamously charted by Cecil John Rhodes and his lewd imperial ambition, a column of British power stretching from Cape to Cairo. Shenoda prefigures the #RhodesMustFall movement among South African students, who in 2015 tore down a statue on University of Cape Town’s campus. Toppling the monument of Rhodes’s brass knuckles pointing northward to Africa’s northern coast, they inaugurated a fiery debate about the future of decolonial education. In Shenoda’s Egypt as in the Fallists’ South Africa, art declares: The people, united, will never be defeated. Shenoda’s poetry, speaking with a gravity born of elemental word choices and direct grammar, travels across geographies of liberation precisely because its words reveal truths, which, once unhidden, haunt the reader with new responsibility.

These first poems apprehend bodily pain in all its rawness and translate its circumstances in vivid language: The sparseness of his diction and clear, calm descriptions turn readers into witnesses to the agonies of surviving history. But the past does not own Shenoda’s voice, which also renders the difficult truth that the beauty of coming fully alive costs dearly. Read these poems out loud and you will try, maybe, to back out of what you have just repeated, lines so sharply beautiful that their truth verges on a curse:

Great-Grandmother used to say,
“If you throw salt away
God will make you
pick it up
one grain at a time
with your eyelashes” (3)

Much of the work seeks out the poor, the sacred and the ecological; worlds too quickly squelched in the rush of contemporary cosmopolitan living. The writerly technique of entangled first- and third-person voices attend to the ignored details of a worker’s body, the “kneecap of a man whose only hope was grounding toil / Scrubbing my skin with the earth for food” (23). Elsewhere the desert is home to other ignored voices, here silenced by Christendom’s erasures of its African roots, as “two thousand years of chants and prayers / seclude themselves in the eastern desert” (6). The poetry’s revelations do not come cheap. These are “songs to sing when sorrow / has taken flight in us” (21), poems that wander through crowded streets and forgotten villages where the poet’s most important work is witness. He shows us the glint of a gold chain suspending a Coptic cross snatched from a woman’s neck “Standing on the Corner” in Cairo (3). He makes us watch as Los Angeles police savage black and brown people with billy clubs “on the bilingual highway / where color means a beating / if your taillight flashes / anything other / than English” (49). And he does not look away from a man whose “enemy stripped him of his clothes / and dipped his nude body in tar, [then compounded cruelty, capturing] a buffalo — and with her tail, tied the man to her haunches, / beat her and watched / the abused parade the town square” (8). Shenoda unriddles nothing; instead, his poems work at the nub of human experience, delicate and deadly.

Shenoda instructs us by example, invocation, and manifesto as to what language must do in a world unsurvivable unless it changes:

We speak forgiveness
like giraffe tongues
long & ready to unravel

The past unravels our future in the intimate touch between bodies, living and remembered, human and animal, rural and street.

The second collection, Seasons of Lotus, Seasons of Bone (BOA Editions Ltd., 2009), leans more heavily into the parabolic language of a sage. I quote the full text of its first riddle, “Schism,” to linger over the sphinxlike elegance of this beginning in pause and puzzle, taking time:

One man dreams
Of fire
But cannot strike
Two sticks

One man strikes
Two sticks
But cannot dream
Of fire (13)

The collection’s title and this first poem alert us to the work Shenoda expects of his readers: where the first collection’s title called upon our geographic imagination, in Seasons of Lotus, Seasons of Bone, if we are to grapple with the mystical, the movement, the malleable idioms of these Seasons, our imaginations must give time to his poems. What will that look like, a double dreaming of time as flowering lotus and dessicated bone? We can look for the ways he adopts multiple indigenous time zones, ways of understanding history in Egypt’s Arab and Coptic present, its African cycles of fertility, its ancient pictograms. These poems walk us through the palimpsests of modern Cairo and decipher this city’s construction by stacked generations: “Ingenuity is the notion of building / On a foundation made from loss” (14). His African animism says, “Lord, my roots sprout three trunks. // Lord, I am a rock made of wheat” (18).” Nature reminds us how to read hieroglyphics, a script that, “like sky / contains no end” (21), its image-writing clearest in a grandmother’s sun-warts, or the pale blue rings around an uncle’s clouding pupils. In the collection’s title we have the promise of a passing: We are only in this poem-world for a season, maybe two. And that passing, an inner exile of sorts, makes the way we carry memory, and translate it, all the more mysterious.

Shenoda’s parabolic imagination often syncs time with the arrivals and departures of Egypt’s ecologies, as he does “In the Season of Paremhat,” a poem named after the Nile’s leavings that fertilize a nation’s seeds, cross-pollinating counter/intuition:

Working with our hands is holy work, silt to sustain, silt’s pour is silt’s song, and song its own Mesmer. Always, in these seasons, there is the sense of a time to come that shows first through the weft of poetic text. What gorgeous mysteries will come in continuance? What deciphering will we do, running light fingers over code “tightly woven in the curls of her hair / the rosetta stone of tomorrow.” What rough tenderness will we learn as we watch how a mother “thrusts to the knee // cracks the cane / disseminates sweetness / fibrous light in their mouths”? (59–60) These lines show us the world is vital text in plain view but only if we pay attention, read and reread surfaces caught in a glance. The particular rhythm of these quick-takes emerges in deceptively spare distillations, spelling out sense that holds together lightly, like the gesturing hands of devout men in conversation, like a stone tablet relaying across languages.

Shenoda’s most recent collection, Tahrir Suite (Triquarterly, 2014), seems less riddle than epic, but in this book-length chronicle of two personae migrating from their home in Egypt to a global north as unmapped as it is unknowable, their odyssey is punctuated only by questions. Tekla and Isis’s lives at the margins emerge in text alternately justified right and left, and what lyric poetry can do, leaving the center, the narrative thread unspecified, turns their journey into a modern migration fable of sorts. The specificity of this story is exquisite, just as its mysticism is insistent. Glossing the title, Shenoda writes Tahrir (literally “liberation” in Arabic) is the square in downtown Cairo where Egyptians overthrew Hosni Mubarak in 2011 after his 30 years in power, but also, two years later, deposed elected president Mohamed Morsi, giving way to military rule and “some of the bloodiest and most divisive [months] in modern Egyptian history” (75).

Shenoda’s eye for gesture as a dense archive of story draws readers into Isis’s inner landscape of desire and drudgery. We do not look into her face so much as through it, a mask and a shield, yes, but also the only home she will never leave. Much of her narrative is spent in waiting, drawing to the surface the way time is gendered and how what appears an impulsive action emerges from hours of solitary reflection. Applying iconic eyeliner becomes a secret operation of resolve:

Entering the theater of intimate relationships becomes the work of a silent, ambiguous sisterhood:

And, with Shenoda’s particular attention to the humble, the mystical, the ecological, Isis reads antique messages etched into what might be a splinter, or a fossil — messages we sense her taking time to decipher, bent over in a limitless solitude:

Isis and Tekla’s journey is, of course, urgent, which is why the stretches of time spent in wait feel so taught. The weight of fear presses upon them, making choice an abstraction in the shadow of political and sectarian violence:

To live in diaspora we flee carrying nothing but our own history in our mouths. This is the truth of a Caribbean raconteur’s call, Crick! and our response, Crack! And this is the truth that holds Tekla and Isis together, living off of the story of themselves. But they know, too, that narration becomes fiction, sometimes willful, sometimes forced.

The lies we tell ourselves to keep going are ours nonetheless: 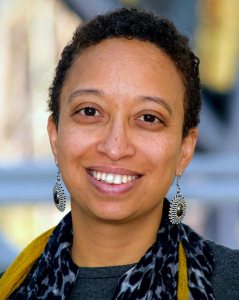 Tsitsi Jaji is the author of two poetry collections, Mother Tongues (2019, winner of the Cave Canem Northwestern UP Award), and Beating the Graves (2017, African Poetry Book Series), as well as a chapbook, Carnaval (2014) in Seven New Generation African Poets. She is an associate professor at Duke University, and author of a monograph, Africa in Stereo: Modernism, Music, and Pan-African Solidarity (2014). Raised in Zimbabwe, she considers herself an African poet and an African American scholar.